A Mini Survey of Digital Humanities in European Research Libraries

LIBER’s Digital Humanities and Digital Cultural Heritage working group is preparing a survey for the entire LIBER community, to gain a fuller understanding of the DH-world of European research libraries.

We’ve been gathering input for this survey in many ways, including by conducting a mini-survey of our own working group members. Their answers both provide us with input about how to organise the bigger survey and serve as institutional Digital Humanities’ use cases. This post describes the most striking outcomes of our small survey.

The survey was opened after our working group meeting on 10 April and closed just after LIBER’s 2018 Annual Conference in July. In total, we received 22 replies. Five libraries requested we keep their input within the working group. Their answers are represented anonymously in the graphs below. The other 17 libraries have agreed to share their stories, and these can be downloaded via LIBER’s Zenodo Community.

We asked the libraries to describe one DH activity in this survey. The survey is therefore not a comprehensive description of what libraries are working on in this field but it does give an insight into their organisation. In this summary, we don’t describe all answers. Instead we’ve opted for a user-friendly overview. 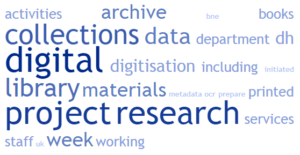 Word cloud of activities mentioned in the survey.

How Are DH Activities Organised?

Of the 22 libraries who responded, eight have been running a DH activity for under a year. Half have been active between 1-5 years and only three libraries have had a DH activity for more than five year. Most (13 libraries) have a team of 2-5 people working on DH, with teams of 6-10 people (six libraries) following closely. A majority of the libraries (16) conduct the activity as part of a policy, while six libraries do it as an ad-hoc activity. Looking at budget, over half have dedicated funding for the activity. Nine libraries are doing this without any dedicated budget.

Do you have dedicated budget for this activity? 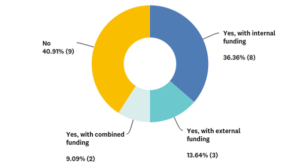 What kind of collections are you using? 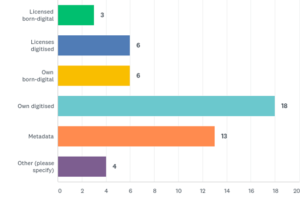 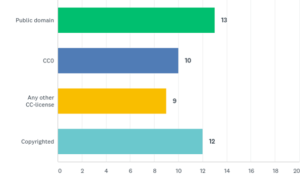 Who Are We Working With & How?

However, when asking how aware academics are of the DH activities in the library, most libraries said ‘Somewhat aware’ which we described as ‘They know the library does something, but not sure what’.

This might also make sense when looking at what the 22 libraries are mostly doing: providing access to digital collections. However, skills training and advice is also often mentioned. We’d like to explore this further in the larger survey.

How did you find/build a relationship with the researchers working in this activity?

What would be the main topics describing your relationship with the researchers working in the activity?

How aware are academics in your institution of the DH activities the library is active in? 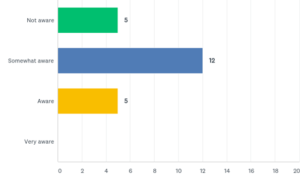 We also asked about the skills of library staff and any skill gaps. Nineteen libraries identified a skills gap. Of these, 16 said they were missing hard skills such as programming or tools. Three libraries missed soft skills such as communication and project management.

Half of the libraries subsequently offered training to their librarians, such as Library Carpentry workshops. These events were often organised within the scope of the activity or belonged to a personal development programme. Only two libraries indicated it was part of a library-wide training programme. Unfortunately the remaining libraries which did not offer training said this was because of lack of budget.

As shown above, not a single library indicated the academics in their institutions are very aware of what the library is doing with DH. However, we communicate a lot! Or at least, on a lot of platforms. That raises the question: why aren’t we reaching academics more? And why do libraries mostly work with academics who they already know?

If the library promotes the activity, where does it do so?

This small overview gives us some interesting insights into what is happening in this small selection of libraries and raises some questions about the choices we make, but we want to know more!

The team of the LIBER Digital Humanities and Digital Cultural Heritage Working Group is assembling a larger survey in the coming months and we would be very happy if you could help us by filling it out.

The Building Relationships sub-team of the LIBER Digital Humanities Working Group has published a new ..