A Vision for Open Science 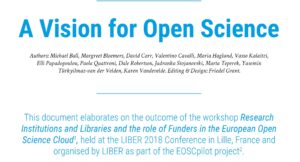 A few months after the very exciting workshop Research Institutions and Libraries and the role of Funders in the European Open Science Cloud, which brought together key representatives of research funding organisations, research institutions and libraries, a group of participants have produced a report outlining their vision for open science.

The report (which can be downloaded from Zenodo) elaborates on the incentives, mandates and roles these actors can play to change the status quo. It sets a vision in which open science is the norm, and all funding bodies as well as institutions and researchers recognise the benefit of open science and embed best open science practice into their processes.

The workshop Research Institutions and Libraries and the role of Funders in the European Open Science Cloud — held at the LIBER Annual Conference in Lille, France on 4 July 2018 — was organised by LIBER as part of the EOSCpilot project of the European Commission.