LIBER’s 2016 Annual Conference in Helsinki, Finland was our biggest yet, with 541 registered delegates and over 40 speakers. How do you summarise three days of intense discussions, inspiring talks, and of course plenty of networking during the lively social events? It’s a tall order but we’ve selected a few highlights.

For more information on the conference, please note that presentations can be found on the LIBER 2016 Conference website (linked within the relevant programme section). Keynote talks (and a few parallel sessions) were recorded and can be played back. Photos are also available on LIBER’s Flickr stream.

A Plea for Open Data

As Secretariat Director of the intergovernmental Group on Earth Observations (GEO), Barbara J. Ryan made an impassioned plea for Open Data. A key message of her impressive presentation, supported by an array of earth observation visuals, was that countries have borders but earth observations don’t. Everything that happens in the eco-system has an impact on the rest of the world.

Although she does not work in the library domain, Ryan noted that GEO deals with similar issues to the library world. They work as a broker, connecting providers of observations with all kinds of users, without owning any data themselves. They now have an open by default policy. Before implementing this policy 53 (paid for) scenes were downloaded a day. The open data policy increased this to 5,700 scenes a day. And although they went from a paid for service to an open service, the economic benefit of the observations increased enormously by implementing this policy. 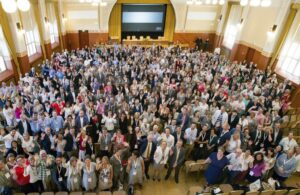 See Barbara’s presentation and a recording of her talk, which Chris Banks, Director of Library Services at Imperial College, named one of her top LIBER 2016 moments.

The talks of the other keynote speakers — Dr Ralf Schimmer, Riitta Maijala and Mia Ridge — were also appreciated. In particular, Dr Schimmer caught the audience’s attention with his plea for a complete transformation of the publishing system, if Open Access on a large scale is to be achieved.

“Ralf Schimmer’s presentation was the highlight of the conference for me, notwithstanding the excellence of other presentations. It changed the way I view our approach to open access,” said one conference delegate.

During the Meeting of Participants, Drs Anja Smit of Utrecht University Library was appointed as LIBER treasurer, taking over from Dr Matthijs Van Otegem of Rotterdam University Library. Dr Van Otegem will continue to serve on the Executive Board, as will Dr Giannis Tsakonas of the Library & Information Center, University of Patras. Both were elected to their current roles by LIBER Participants at the conference.

Of the more than 30 parallel talks, three were chosen as winners of the LIBER Innovation Award. They were:

Twenty posters were presented, and the winner focused on Delpher, the full-text search engine of the Dutch National Digital Library.

The beautifully designed poster describes how Delpher gives access through a single platform to millions of pages from newspapers, books, journals and news bulletins from university libraries, museums and heritage institutions.

This allows users not only to search in the National Library’s own collection, but to quickly cross-search the collections of all these different organizations from a single online location.

The most popular was re-tweeted over 150 times and came from a presentation on Linked Library Infrastructure by Martin Malmsten of the National Library of Sweden.

It is possible that @geckomarma has presented the best slide at the conference, so far! #Liber2016 pic.twitter.com/bssJ8TxX54

See You Next Year!

To all those attended, thank you and see you next year in Patras, Greece for LIBER 2017, July 2-5th.