This interview is part of the Humans of LIBER campaign 2022 — which draws upon the pillars of the upcoming LIBER Strategy 2023 – 2027. We feature real people working at research libraries who make up the LIBER community. We believe that by highlighting our community in a more humane manner, we can create genuine connections within and outside of our network. We hope to see our community inspired by each of these personal stories of working at research libraries.

We interviewed Patrick on the 26th of April 2022 at Luxembourg’s National Library (Bibliothèque nationale du Luxembourg, BnL) while we were in the area for LIBER’s Architecture Seminar. In our conversation with Patrick, we discussed the unique features of a digital library, the ways a library should work for the citizens of Luxembourg, and his interest in the notion of the commons. Now, over to Patrick: 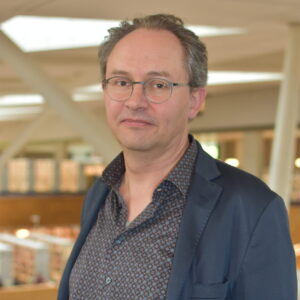 “I have been working at the National Library of Luxembourg for about 20 years now. My first job was to start a digital library. It emerged from a large-scale digital policy programme where all public sector institutions, including cultural institutions, could apply for funding for digital projects. And our then director, Monique Kieffer, had a keen interest to develop a digital library, and that’s how it started. Luckily, there was also one other colleague in charge of IT!

Before then I lived in Berlin working for a small, but already digital, video production company. I became interested in the cultural aspects of software, such as the free and open-source licences like the GPL. I was drawn into the Creative Commons community in the early 2000s, which tried to apply open licensing to cultural and scientific content. Then followed the dot-com boom, and everybody started working for internet companies, including myself …two years later, most didn’t. This is when I moved back to Luxembourg after I’d heard about the big public digital programme.

For me, the new digital library was an interesting place where I could combine commercial and scholarly content, public licences, public service and the Commons. Today we offer a large digital library, several consortial groupings and a clear commitment to open data and open access and most importantly: Every resident of Luxembourg is entitled to a free national library card, including remote access. I believe it is a valuable information commons for the country, an important part of the public sphere.

“I spend a lot of time on management tasks, such as administration, meetings and organising stuff. This part of the job may not be that exciting, but you make the best of it. Working exclusively with digital means that there is also a lot of technological changes. One notable difference of my team is that we are implementing and refining new tools almost continuously. Right now, the entire library is in a large cloud migration project, which does include the digital library back office and interface. It is quite an unpredictable journey to get to the bottom of vendor promises and often disappointing to realise how little of these new systems is really “digital first”. But it will be a new infrastructure that gives us new strategic options, which allows us a reassessment of how we work with our external partners. This is very timely, as we are confronted with an increasing demand for digital libraries. Channelling these elements into new principles and service offers, I find very interesting work.

My job has never really been business as usual in that sense; the environment is always changing and quite profoundly. I really find here a mix of copyright and licensing work, while working with partners on a national level, allowing for asking the bigger questions such as:

Which digital library infrastructures do we need nationally and what do they have in common from a consortia perspective?

Starting with the first lockdown in 2020, we have seen a 50% increase in usage of the digital library and surprisingly it has never gone down since. Luckily, we were quite well prepared for this demand. We had remote access to almost all the resources in place already so that really helped.”

A general challenge is of course the lack of time and staff. The consortial team has 3.8 FTE, and we manage a 3.5 million EUR subscription budget, two consortial groupings, several digital libraries at different service levels, including the interface and helpdesk for our largest partners. As an example of the challenge, one of our team members updates a 1 million e-book collection every week. This is only possible by automating processes to the maximum of course. But there’s also the challenge: Deeply understanding the process and working with IT to find solutions that work in a production environment takes a lot of time. On the one hand, we save a lot of time by working in a highly efficient way with highly skilled people; on the other hand, this always relies on having enough time to analyse and develop automation. It is not something you can buy in through consultants; otherwise, you’re lost at the first obstacle because you don’t really understand the problem.

The challenge is really to remain sovereign as an organisation and in control as a team while automating as much as possible. Being able to set aside time to set up new processes throughout a busy yearly cycle is always difficult.

The same is also true for changes in licensing and financing models, for example the huge time effort needed for putting into place transformative Open Access agreements with multiple partners and publishers.”

“I think one of the things that is not very well known about our library is that we offer, as a national library, free reading cards also for persons who, for example, work in Luxembourg. The background to this are the 200.000 plus people commuting into Luxembourg every day, that’s almost half of all employees. Our resident population is only 650.000 people. Many years ago, we decided that in a knowledge society, you cannot distinguish between your professional knowledge and private, individual learning – that distinction just doesn’t make sense. That’s why we offer the National Library card so that people who take part in our society and economy can benefit from the information and knowledge in our collections, although I also believe there is a lot of scope to improve the dissemination of these collections. ”

I think that especially in the digital sphere, the whole concept of the national border must be overcome in a European region as integrated as the one Luxembourg is part of.

Outside of the library

“Privately I was active in the Creative Commons community until the early 2010s. It has really established a new collaborative paradigm in so many fields, in collaborative writing (Wikipedia), scholarly publishing (Open Access) and of course Open Data. The openness of the movement left the more social utopian ideas of that movement unprepared for the enclosure and commodification of actors like search engines who do not give back anything or the social networks who exploit the value of “sharing” itself without caring about the copyright licences of the shared content at all.

With these insights, and still strongly believing in the concepts of the Commons, I wanted to move away from digital and intellectual/creative commons to more physical expressions of the commons, such as land and buildings. How can housing and farms become something more co-owned, more commons-like? What new forms of ownership do people need and which do they understand?

There is a surprising amount of existing legal tools such as cooperatives and land leases (“emphythéose” in French) and several interesting legal hacks such as the Mietshäusersyndikat and steward-ownership, but the problem reminds of the early days of Creative Commons:

How does this innovation take root in society and how can it become mainstream? There’s a fledgling network in Luxembourg around these ideas and as always there’s a special magic in beginnings!