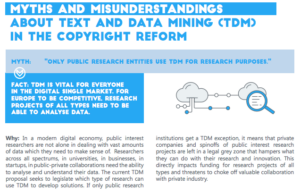 A broad TDM Exception is important for everyone (not just researchers), would boost Europe’s economy and doesn’t mean that publishers would lose money.

A new factsheet — Myths & Misunderstandings about Text and Data Mining in the Copyright Reform  — explains each of the above statements, and busts other misconceptions such as the idea that copies of works or data made for TDM could be easily re-sold for commercial gain.

LIBER collaborated with Science Europe, SPARC Europe, the European University Association and the European Alliance for Research Excellence to produce the factsheet. By clarifying these questions, we hope to have a broad TDM exception included in the European Commission’s copyright reform proposals so that all of Europe can benefit from better research and innovation.

Proposal for a Digital Services Act — Research, Education, and ..