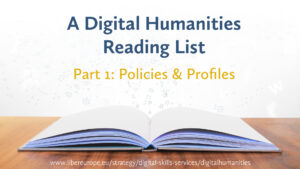 LIBER’s Digital Humanities & Digital Cultural Heritage Working Group is gathering literature for libraries with an interest in digital humanities. Four teams, each with a specific focus, have assembled a list of must-read papers, articles and reports.

The recommendations in this article (the first in the series) have been assembled by the team in charge of Recommendations for identifying and establishing policies and profiles regarding digital humanities’ portfolios, led by Demmy Verbeke of KU Leuven.

When a particular topic gains traction in academic theory and practice, literature on the matter soon follows suit. No wonder then that, in recent years, we have seen the appearance of numerous scholarly articles about Digital Humanities (DH), as well as companions, handbooks, readers and journals devoted to the topic. What is more, DH practitioners typically embrace alternative forms of scholarly communication, resulting in a steady stream of blog posts and publications on collaborative platforms like GitHub or the Open Science Framework. As an academic endeavor, DH has also captured the public imagination so we find numerous newspaper or magazine articles and opinion pieces. Finally, governments, funding bodies and academic institutions have produced numerous reports and DIY manuals as they ponder if and how to support DH.

In this post, we want to highlight a few choice examples of this literature, which we found particularly informative when contemplating why DH deserves the attention of research libraries in the first place and the various ways in which it can be integrated in the day-to-day practices of these institutions.

We want to highlight a few choice examples literature which we found particularly informative when contemplating why DH deserves the attention of research libraries in the first place, and the various ways in which it can be integrated in the day-to-day practices of these institutions.

A number of more extensive publications provide detailed advice and practical guidelines on how to organize DH support, based on experiences gathered during the last decade. Noteworthy examples include:

One of the objectives of this team’s focus on policies and portfolios of libraries in DH is to make good use of these overviews of experiences, challenges, tips and reflections to support the uptake of DH in research libraries all over Europe.

To find out more about the team and LIBER’s work in this area, see the Digital Humanities & Digital Cultural Heritage Working Group page.

The Building Relationships sub-team of the LIBER Digital Humanities Working Group has published a new ..