Twenty organisations, including LIBER, have signed an open letter to European lawmakers calling for changes to a proposed Text and Data Mining exception. 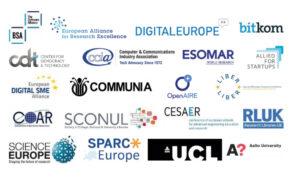 Coordinated by the European Alliance for Research Excellence, the letter asks Members of the Legal Affairs Committee (JURI) in the European Parliament and Deputy Permanent Representatives of the 28 Member States to fix the Text and Data Mining (TDM) exception in the European Commission’s proposal for a Directive on Copyright in the Digital Single Market.

“If Europe is to truly modernise copyright, its proposals should enable Open Science, innovative research and the creation of sustainable knowledge in the digital age. Unfortunately, unless the proposed TDM exception is amended, it will do the opposite – inhibiting new discoveries and innovations by unnecessarily restricting researchers, students and companies from using computers to analyse data to which they already have legal access,” said LIBER President Kristiina Hormia-Poutanen.

If Europe is to truly modernise copyright, its proposals should enable Open Science, innovative research and the creation of sustainable knowledge in the digital age. – Kristiina Hormia-Poutanen, LIBER President

If the current proposal for a TDM exception is not revised, the vast majority of the European research and innovation ecosystem will be penalised. Scientists and students will have to pay extra licenses, and small businesses and startups who will stop innovating in Europe due to legal uncertainty.

“The licensing solution is, in itself, flawed, as no one can license the entire Internet, the most mined dataset. The language being discussed in the European Parliament on TDM covers startups but only until 3 years after they are founded. This legal uncertainty and artificial ‘glass ceiling’ will prevent stakeholders from investing in new promising European companies dealing with TDM in a range of emerging fields such as big data, artificial intelligence, machine learning, robotics and others. It is not a small niche sector that would suffer if this language is adopted. The negative implications will be massive for research and the economy,” the letter states.

In addition to signing this Open Letter, LIBER published its own call this week for changes to the proposed TDM Exception. We are asking for four key points to be addressed:

More information about our four essential points can be found here.

LIBER’s response to the German consultation on the ..

A number of European recommendations - including the LERU’s advice paper "Citizen Science at ..

Research Under Pressure: Impact of Covid-19 Through A Librarian’..

A number of European recommendations - including the LERU’s advice paper "Citizen Science at ..