Humans of LIBER Interview – Saskia Scheltjens, Head of Research Services at the Rijksmuseum.

This interview is part of the Humans of LIBER campaign 2022 — which draws upon the pillars of the upcoming LIBER Strategy 2023 – 2027. We feature real people working at research libraries who make up the LIBER community. We believe that by highlighting our community more humanely, we can create genuine connections within and outside of our network. We hope to see our community inspired by each of these personal stories of working at research libraries.

We interviewed Saskia at the Rijksmuseum’s iconic library on the 14th of January 2022. Saskia shared her passion for working in public institutions, the importance of telling more than a single story, and the key skills a librarian needs. Now, over to Saskia: 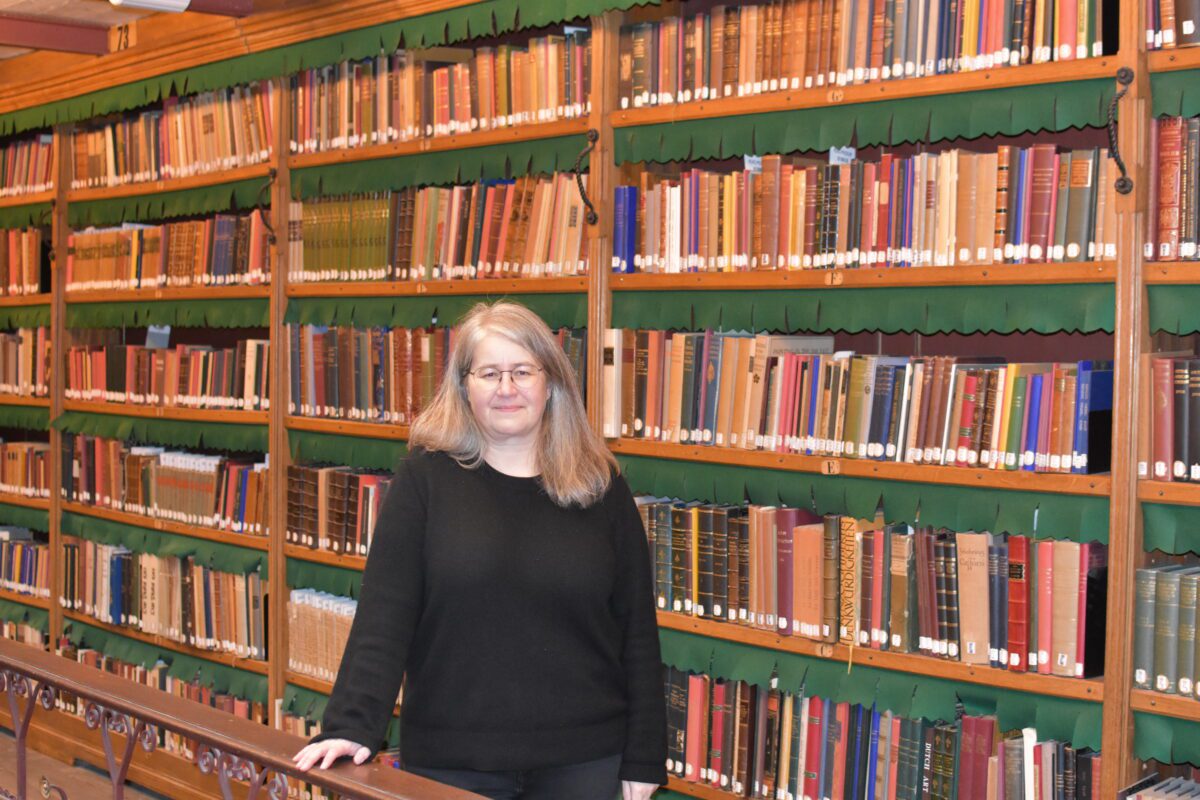 I have been switching back and forth between academic libraries and museum libraries, or museum positions, for the whole of my career. My previous job was at the faculty library of Arts and Humanities at Ghent University, Belgium, where I set up a huge faculty library from scratch. Ghent University is known for its very early public stance on open access, open data, open infrastructure. As a librarian, that appealed to me because the concept of openness is core to what we’re doing. There, I started to work more with people who were doing digital humanities research. I came from a strict library background, and that was so interesting because it poses the broader scope of what you can do with information and data. Then, I was asked in 2016 to set up a new department here. If you are serious about doing digital research, you can’t only work with library data, you have to have the whole spectrum: library data, archival data, museum data, and research data. That was the aim of the new department that I had to set up.

“When I look back on my career, the positions that I’ve done usually involve a lot of change management – starting from something which was really not working. I try to make something new. I think one of the reasons why I like libraries is the fact that they are radical public institutions. For me, that feels the most sensible place to do things. I work with public money, and there is a community that has an involvement in what I do. It feels much more gratifying to do something that responds to a public need.”

“I read that Taco Dibbits, who is now the main director (of the Rijksmuseum), said “knowledge needs to be shared” when he was interviewed about the open data policy of Rijksmuseum. With the Rijksmuseum, the whole idea of openness is a basic starting point. It’s not something that needs to be fought for. That is so liberating. That’s the kind of attitude and management that I want to work with.”

“I think the big change in the library sector is the rise of digital. Working with digital has been a reality for the past twenty years for librarians, and the real challenge is a post–digital world where digital is a given. How do you build hybrid services in which people don’t feel alienated? And what about art, which allows for such a direct connection to you as a person on an emotional level, and intellectually? What is also very much on my mind is digital preservation and sustainability. With different kinds of technologies becoming more embedded in our day–to–day lives, how do you work with biases that exist in data and keep the transparency of what we do?”

“One of the things that we, at Rijksmuseum, find really important is trying to tell polyvocal stories – not just one story. And that said, we are in a museum that was designed in the nineteenth century, to literally tell one nationalist story of how great the Netherlands is. But this museum, and I think a lot of other museums, have come to the conclusion that that’s not the way forward. One of the challenges of telling poly-vocal stories is that the stories you tell always reflect the infrastructure behind them.”

“My department is working in the back office, responsible for the digital infrastructure of information and data behind what you see. We found money at the end of last year to redesign and redevelop the complete collection data architecture, to make it more semantic and work with linked open data. So that is our challenge for the next two years.

This change is also one of the reasons why I think LIBER is so important, it is the whole conversation. The whole ambition of museums and libraries in the nineteenth century to build a kind of overall, complete, and universalistic idea absolutely would not work anymore. The power of what we do now lies in the fact that it’s connected to other people and to other collections. There is a beautiful quote that says ‘cooperation is at the core of the view of the life of a librarian.’ Openness is a two–way street, not just getting your collection out, but also getting things in. That requires cooperation and networking.”

“I was familiar with research data from working in university libraries, and the whole concept of FAIR (findable, accessible, interoperable, reusable) specifically started out in the research data preservation world. When I came here, adapting FAIR to the GLAM world (galleries, libraries, archives, and museums) was something new. I know that LIBER supported that very much. At that time, and still, there mainly is talk about open GLAM. The whole concept of openness is really interesting, but I think now it is time to diversify it and make it more nuanced. The research library world in Ireland was very responsive to the whole concept of heritage, combining that with FAIR. You see it with Europeana as well – making all these concepts more concrete.

Open collections and open minds, I think those are the values that are important. It’s lofty I know, but moving from open data to open collections, then to open minds, this is one of the things that my department tries to do, and also what the Rijksmuseum tries to do. We try to form a platform for other people to talk about things. The challenge for my department is, how do we keep these conversations and preserve them, so that they form the basis of research topics for the next generation? This is the end goal of open minds. This library was built on the collection in the museum. The collection on display is eight thousand objects, and in the library, there are half a million books with numerous ideas, not necessarily the same as those in the collection. So, the library is a more polyvocal way of viewing and engaging with a collection. And the library gives the tools for society to make choices to tell multiple stories, that can open minds.”

Life outside of work

“I sit in trains a lot, travelling back and forth between the Netherlands and Belgium. And I like trains a lot. So I tend to read, listen to podcasts, and listen to music. There is a really good book that I enjoyed – Burning the Books: A history of knowledge under attack. It’s by one of the people that I really admire, Richard Ovenden, who is Bodley’s Librarian of Oxford. He tells stories about the specific cases in which libraries were lost, and he connects it to the ‘digital delusion’ where a lot of things became digital, but the infrastructure wasn’t stable enough. So, it will be very challenging to keep as much data from the last 10 to 20 years compared with the data kept from the previous generations. It stresses the preservation of what we are doing, the fact that things are digital or a lot of them became digital, doesn’t mean they do not require attention to be preserved. Let alone the whole idea of hybrid reality, how you will preserve that? I find these concepts really interesting.”

If you feel connected to this interview, please tweet about it by clicking on the tweet below (and using #HumansofLIBER)!

“Openness is a two-way street: not just getting your collection out, but also getting things in.” Read our NEW #HumansofLIBER interview with Saskia Scheltjens, Head of Research Services at the Rijksmuseum here: https://t.co/G3WdM6jqn9 @saschel @rijksmuseum pic.twitter.com/EdP9wxRL9O